The bushfires in Australia are now so big that they are generating their own weather, in the form of giant thunderstorms that start more fires, according to the Bureau of Meteorology in Victoria.

“Pyro-cumulonimbus clouds have developed to altitudes over 16km in East #Gippsland this afternoon. These fire-induced storms can spread fires through lightning, lofting of embers and generation of severe wind outflows,” the bureau tweeted on Monday. 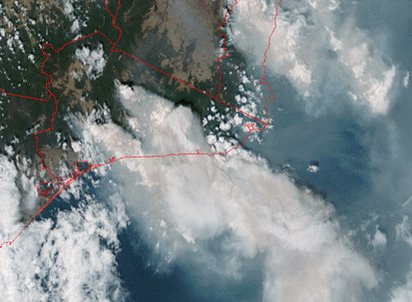 Intense fires generate smoke, obviously. But their heat can also create a localized updraft powerful enough to create its own changes in the atmosphere above. As the heat and smoke rise, the cloud plume can cool off, generating a large, puffy cloud full of potential rain. The plume can also scatter embers and hot ash over a wider area.

Eventually, water droplets in the cloud condense, generating a downburst of rain — maybe. But the “front” between the calm air outside the fire zone and a pyrocumulonimbus storm cloud is so sharp that it also generates lightning — and that can start new fires.

If powerful enough, a pyrocumulonimbus storm can generate a fire tornado, which happened during the Canberra bushfires in 2003.

Scientists worry that “pyroCbs” are on the rise around the world, driven by warmer temperatures and more intense fires, Yale E360 reported. Their plumes are so strong that they can even shoot smoke into the stratosphere, 6 to 30 miles above the Earth’s surface.

Weather records in Greece in 2019