Thanksgiving day is celebrated primarily in the United States and Canada. Traditionally it has been a time to give thanks for a bountiful harvest, something that the ancient Greeks also did thousands of years ago.

Today we give give thanks not only for our wonderful provider mother earth, but also for our ancestors having found the new world. Although the holiday may have been religious in origin, now is primarily identified as a secular holiday in North America. In Canada, Thanksgiving is celebrated on the second Monday in October. In the United States it falls on the fourth Thursday of November.

For thousands of years festivals for giving thanks have been taking place in many locations around the world. In ancient Greece when the underworld god Hades abducted the young maiden Persephone, her mother Demeter wouldn’t feed the world, and winter came upon the land. When Persephone was restored an elated Demeter gave the gift of agriculture to mankind.

The Greeks believed that because of her the earth provided the bounty it did. Honoring her with offerings and ceremonies would promise a new and fresh harvest each year. The holiday dedicated to Demeter was called Thesmophoria. Demeter was also called Thesmophoros because she gave certain thesmoi ‘laws’ to mankind. The festival Thesmophoria, was held in the fall during a month known as Pyanopsion. It occurred between October and November; in the same months as the Canadian and U.S. Thanksgivings. The Thesmophoria were the most widespread festivals and the main expression of the cult of Demeter, aside from the Eleusinian Mysteries.

Today Greeks in America and Canada not only celebrate the modern day “Thesmophoria,” but also add Greek flavor to the American Thanksgiving tradition. Ask any Greek and they will give you a variation on how to cook the turkey, or, you can get chef Peter Minakis’ Greek style Turkey, below.

A Guide to the Greek Thanksgiving Table – By Peter Minaki

First, build your menu around the centerpiece – that being the turkey. Buy an organic, local turkey and give it a Greek twist: a stuffing with ground meat, giblets, raisins, pine nuts, rice and herbs and spices of your choice. Allspice comes to mind.

Mashed potatoes and gravy from turkey drippings are the natural sides but why don’t you add some garlic and Greek yogurt in the mash? I make my cranberry sauce scented with cloves and orange zest. Roasted root vegetables are a favourite in our home and I love tossing them in fresh orange juice, olive oil, thyme, fennel and a splash of wine.

Waiting for the turkey to be ready causes one to think of appetizers or something to nibble on until the big meal is ready: Spanakopita or tyropites (cheese pie), offer some warm olives in citrus and spices, make some dips like Tyrokafteri or roasted red pepper dip with some pita bread wedges and an array of Greek cheeses. Dolmadakia with some Tzatziki for dipping will keep the family at bay until dinner’s ready.

With my family, we like soups now that the cold weather has arrived and a turkey Avgolemono soup is the perfect start to your sit down Thanksgiving dinner. Also, we always have one or two people who don’t like turkey so, being Greek means we have to have everyone participate and eat at the Thanksgiving table. Make a Pastitsio or Moussaka. It may seem like a lot of food but remember we are Greeks…portion control is a fantasy.

It’s Thanksgiving – decide on pumpkin or apple pie then round’out your desserts with one of my favourites, a Galaktoboureko. It’s one of the best Greek desserts. Serve Greek coffee with dessert and have some fun with some coffee cup reading. Invite that “magissa” aunt over to tell our fortunes!

To complete the Greek Thanksgiving table, why not add some Greek wine to help wash down the feast? Think about it: we spend the whole winter thinking summers in Greece so there’s nothing better than uncorking Greece. For your starters, open a bottle of Amalia Brut, a sparkling wine from Mantinia Tselepos or try a Kir Yanni sparkling rose.

You could then open an Agiorghitiko red to go with your turkey or try a Xinomavro/Syrah from northern Greece. If you’re the type that wants to stick to whites with your turkey, a Malagouzia or Assyrtiko will be a sure crowd pleaser.

For dessert, you may offer a Vinsanto from Santorini or a chilled glass of Muscat from Limnos or Samos.

We are Canadians and Americans but we are also proud Greeks and nothing says Greek pride like sharing our Greek heritage at the festive table. Have a delicious, safe and memorable Thanksgiving surrounded by family and friends!

*Peter Minaki is a Toronto-born Greek-Canadian who runs kalofagas.ca, one of the most popular Greek food blogs. When he is not cooking he is a financial advisor. You can contact Peter at truenorth67 AT gmail dot com. You many now order Peter’s cookbook, Everything Mediterranean. Visit his site for delicious Greek and Mediterranean recipes at www.kalofagas.ca

When my family came over from Greece to the United States, we were quick to adopt some of the more “American” holidays, such as Thanksgiving, which celebrates the first successful harvest feast eaten by early European settlers in America. Like most Americans, we were eager to not only have the day off, but to also embrace such a food-centric holiday. However, we weren’t so quick to adopt some of the more traditional foods. I don’t know about you, but Greek foods make their way into our American Thanksgiving menus year after year. Here’s an overview:

We did have a roasted turkey, but if we thought we needed more meat than what a turkey would provide, we usually didn’t serve ham, we’d serve lamb! Even though pork is a popular meat in Greece, and it wasn’t as beloved as lamb. I’ve even hard of Greek families forgoing the turkey all together and eating roasted lamb instead! The point wasn’t to eat turkey; it was to be thankful to have such a great meal. Lamb was, more often than not, the crowd favorite. Here’s a recipe for leg of lamb!

When I was a child, I had no idea that stuffing traditionally used bread. I always thought that it involved rice, ground meat, chestnuts, and delicately seasoned with some allspice. Find the recipe for this dish here.

It wasn’t until Middle School that I learned that “normal” stuffing was actually made from bread cubes. My family would even stuff the turkey with this creation! I always knew that Thanksgiving was arriving when the whole family would gather to peel all those roasted chestnuts.

Even though we loved sides such as mashed potatoes and squash, Thanksgiving dinner wouldn’t be complete without Kalamata olives, imported feta cheese, and a big Greek salad! It seems that even when we tried to adapt to the American culture, we always needed to bring our beloved foods to the table. Besides, it simply wasn’t mealtime without plenty of fresh salad! 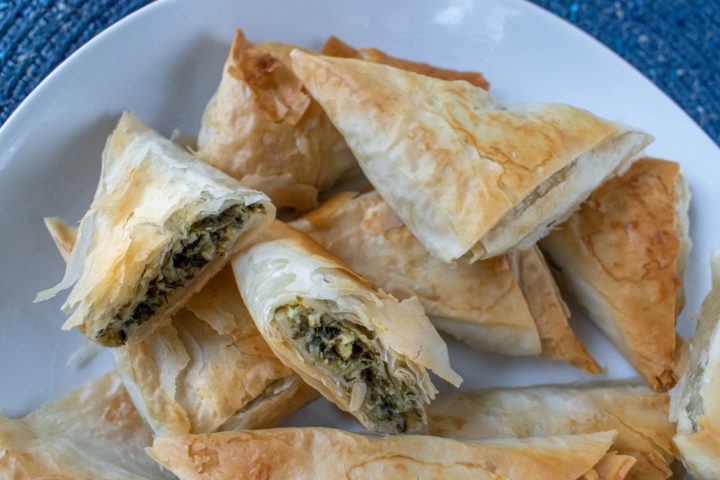 No Greek table would be complete without some kind of pita. The two most common are spanakopita (spinach pita) and tiropita (cheese pita). However, there are other types of pitas that would taste good at Thanksgiving, such as this kolokithopita (squash pita). These call be served as part of the main course or for an appetizer.

Greek cuisine has a lot of delicious vegetable dishes to choose from. Horta, or boiled greens, is a staple food at most Greek tables. It is equally as delicious served warm or cold. Other great dishes include green beans with tomatoes (fasolakia), and Greek-style stuffed eggplant. 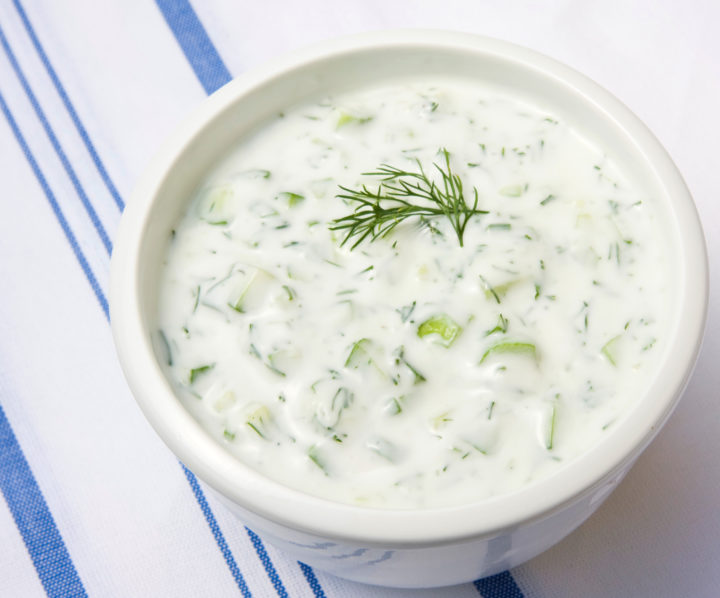 The nice thing about most Greek dip recipes is that they are incredibly versatile. They can be served as part of an appetizer spread, or they also make nice condiments and can accompany the meat and turkey. For example, tzatziki makes an excellent addition to the Thanksgiving meal because it accompanies meat very well. The same is true for skordalia, hummus, and other types of spreads. 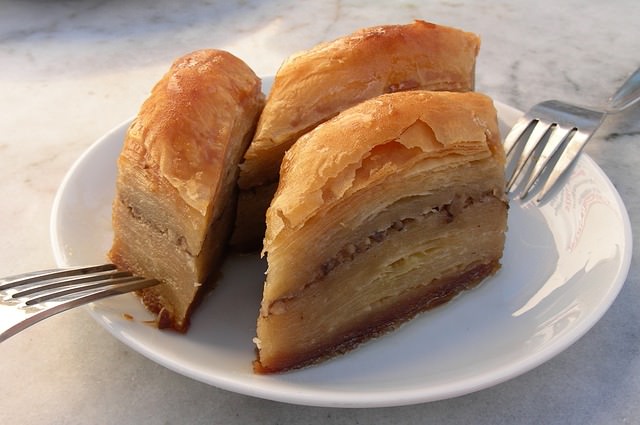 Did you serve pie at Thanksgiving, or did you serve traditional Greek desserts? I didn’t have my first piece of apple pie until I was much older, and even now, I much prefer a nice piece of baklava to a slice of apple pie. There are plenty of Greek pastries that are delicious during Thanksgiving, such as milopita, or apple cake, and kolikithopita, which is made with squash. Standard Greek pastries such as baklava, kourabedies, and koulourakia are also a great addition to the Thanksgiving table. Besides, a cup of Greek coffee really wouldn’t be complete without koulourakia? Here’s a look at some Greek dessert recipes.

In many ways, Thanksgiving is a holiday that is perfectly aligned with the Greek way of life. Family, food, and a thankful heart are three things that are at the center of life. Therefore, it has been an easy holiday for Greek immigrants to adopt. On the other hand, it’s much easier to adopt them when familiar foods are on the dinner table.

Each family has their own traditions, and for Greek-Americans, these traditions usually take traditional elements from American cuisine and merge them with their beloved Greek favorites. I can’t even remember the last time I didn’t have a piece of baklava for dessert!

Elea in New York: A Meal Fit For The Greek Gods